So I fired fired up Reflector to see what Test-Connection actually does, and it is using WMI and the  Win32_PingStatus class, I have not been able to reproduce the error calling the class directly, so I was wondering where the problem could be.

So I did a  trace command to see if that would give me anything, one thing I noticed in the return value there was a value called 11013, shortly thereafter this was written in the trace.

So I  looked up the errorcode from ICMP_ECHO_REPLY32 structure, which has an error code called 11013 which is:

The time to live (TTL) expired in transit.

Which seems fair because TTL is relatively low, then I looked a bit deeper to try and find what 11013 also could mean

In  Winsock Error Codes I found:

Then I did some additional testing.

If you do a Trace-Command on the example with TimeToLive = 11 which gives the error: Error due to lack of ressources, you will see that the error code is 11010 which corresponds to:

If you look at the WMI Win32_PingStatus error codes 11010 corresponds to:

The request timed out.

Which you can confirm using ping from the command prompt: 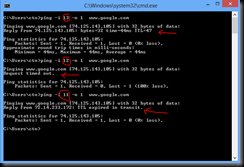