I recently tried a software package called MojoPac.  During the install of MojoPac to my USB stick it complained that it might not work very well, because it detected that I had a slow USB stick… So I started wondering, what do I need to test the speed of my USB drives, besides some large files and a stopwatch.

I did some quick googeling and found a nice little utility called  Chkflsh, which can be downloaded Here

It is a very nice little tool, that allows you to check the speed of the drive, and make sure all areas of memory works as it should. 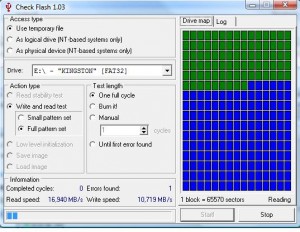 I have just gotten an 8GB Kingston DataTraveler, which I am currently testing…. I am getting Read speed around 16MB/s and Write Speeds averaging just above 10MB/s. Pretty decent speed compared to price, it costs around 170Kr (35USD)

Tickets booked and I am ready to go! USA Here I came
comments powered by Disqus